ChatGPT for SEO: 20 Ways to Leverage ChatGPT in your SEO Activities

The release of ChatGPT by OpenAI (chatbot built on top of OpenAI’s GPT-3.5 that interacts in a conversational way) at the end of last month became a tipping point for AI that took the world, including the SEO industry, by storm due to the comprehensiveness and quality of answers, even making Google’s management to issue a ‘code red’ due to its rising popularity to look for information.

However, it’s important to be aware of its limitations, many of which were explained at the time of its release, and in this and this comprehensive guides covering ChatGPT by Roger Montti, like not being aware of content created after 2021, built-in biases, and ultimately, the fact that featuring purely AI generated content violates Google’s guidelines.

Specifically, Barry Schwartz covered how when asked about “Using AI to plagiarize the content, modify it, and then outrank in search results?” Google has mentioned that:

Scraping content, even with some modification, is against our spam policy.” Duy added that Google has “many algorithms to go after such behaviors and demote site scraping content from other sites.

However, there are many other use cases for ChatGPT to support our day to day SEO activities -important to highlight the “support” role here, rather than letting it run them completely in autopilot-.

In fact, as explained by Vincent Terrasi here, mastering prompts -instructions to guide a conversation or interaction with AI- will become an important skill for SEOs to generate the desired results, for which there are already resources like “Awesome ChatGPT Prompts”, “ShareGPT” or “LearnGPT” repositories.

There have also been extensions and guides developed to facilitate the usage of ChatGPT, as well as related tools that have been recently launched that are worthy to check out:

Taking all of this into consideration, as many of you, I’ve been playing with ChatGPT in the latest weeks to identify ways to leverage in SEO tasks. Here are 20 of them that you can use as a reference too:

“Generate a list of X popular questions related to “<keyword>, that are relevant for new <audience>”

2. Classify a list of keywords based on their search intent

“Classify the following keyword list in groups based on their search intent, whether commercial, transactional or informational: …” 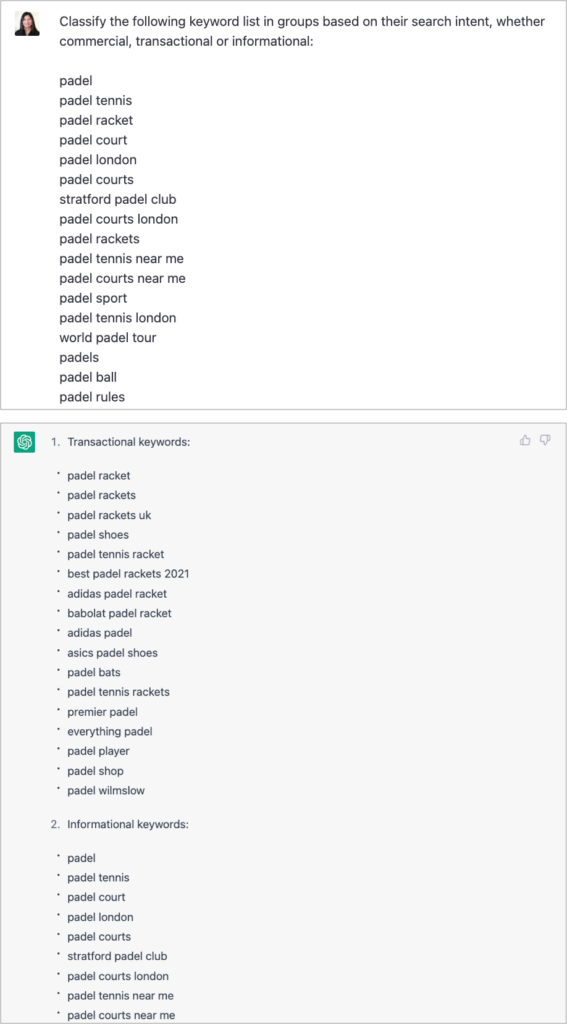 3. Cluster a list of keywords based on their semantic relevance

“Cluster the following keywords into groups based on their semantic relevance: ….” 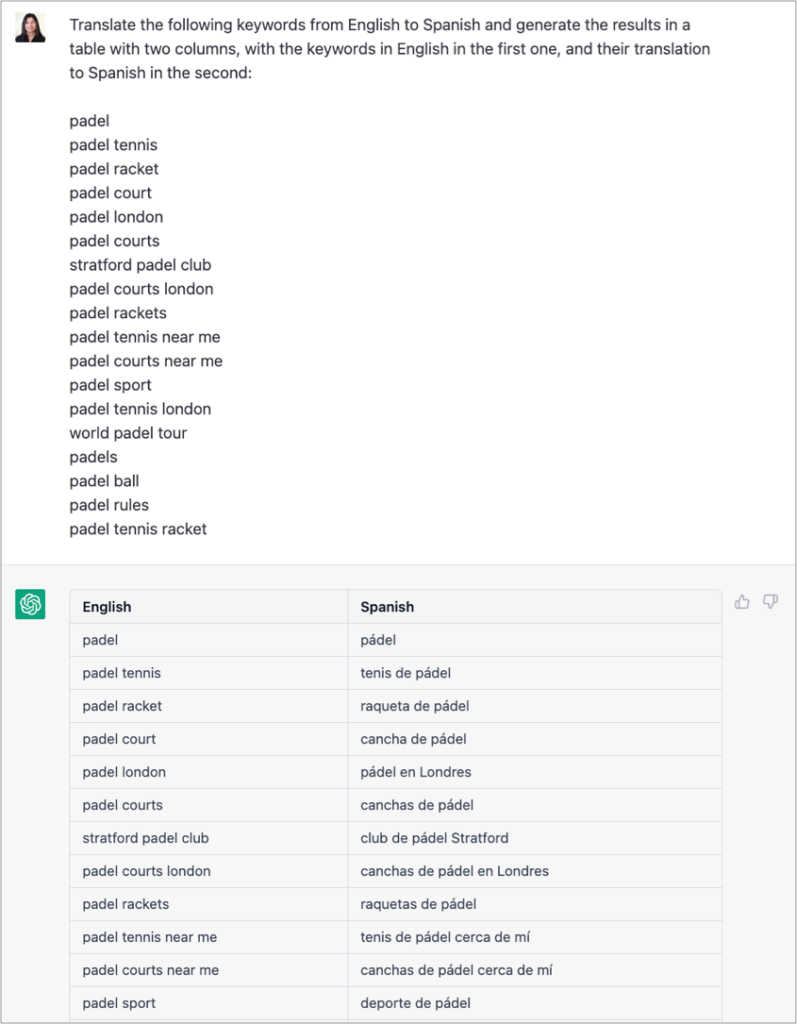 “Generate X unique title tags, of a maximum of 60 characters, for the following text. They should be descriptive and include the term <keyword> in them: …. “ 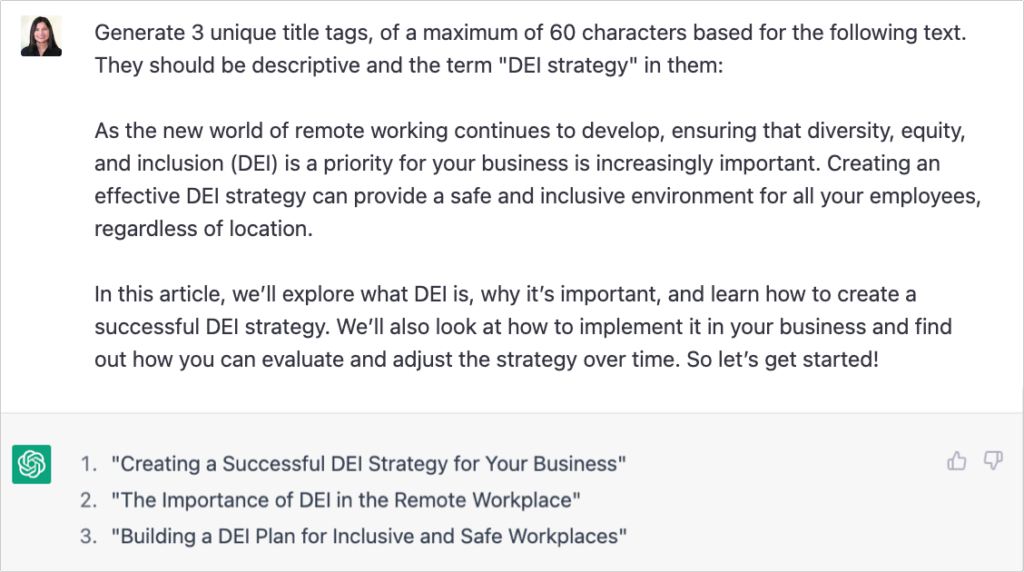 The same can be done for meta descriptions, also specifying that they should be catchy and include a call to action:

“Generate Z unique meta descriptions, of a maximum of 150 characters, for the following text. They should be catchy with a call to action, including the term “Main keyword” in them: ….” 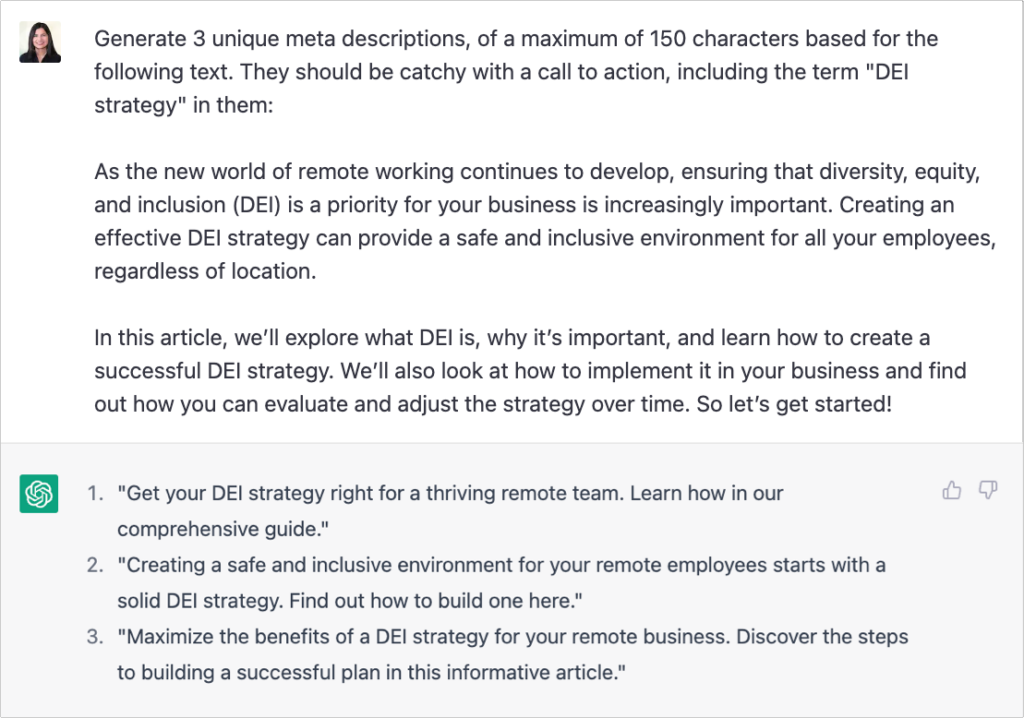 Generate different versions of a text to avoid content duplication:

“Rephrase the following paragraph in X different ways, to avoid repetition, while keeping its meaning: … “ 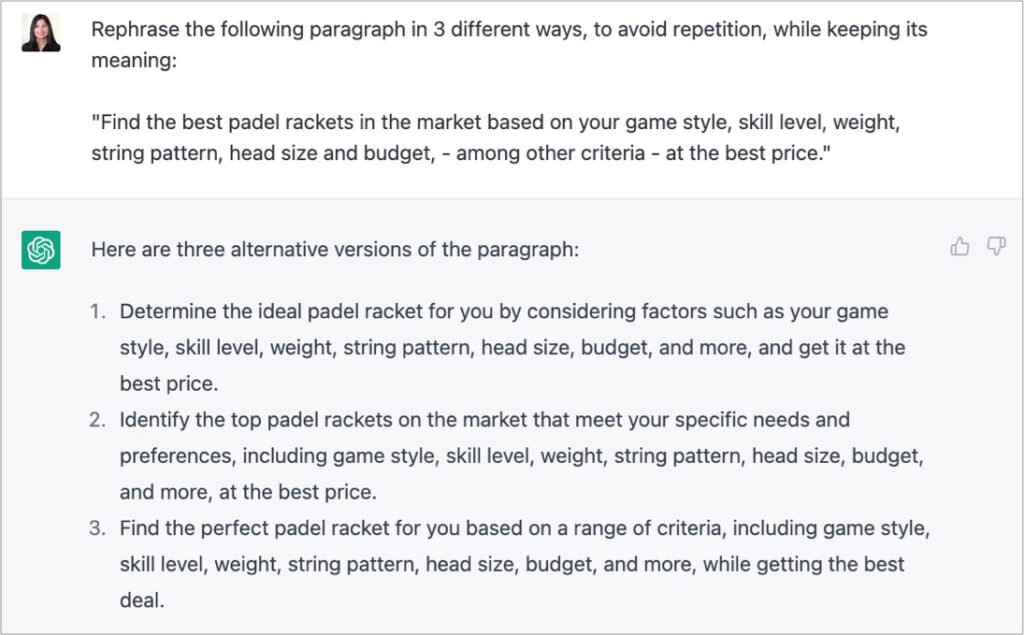 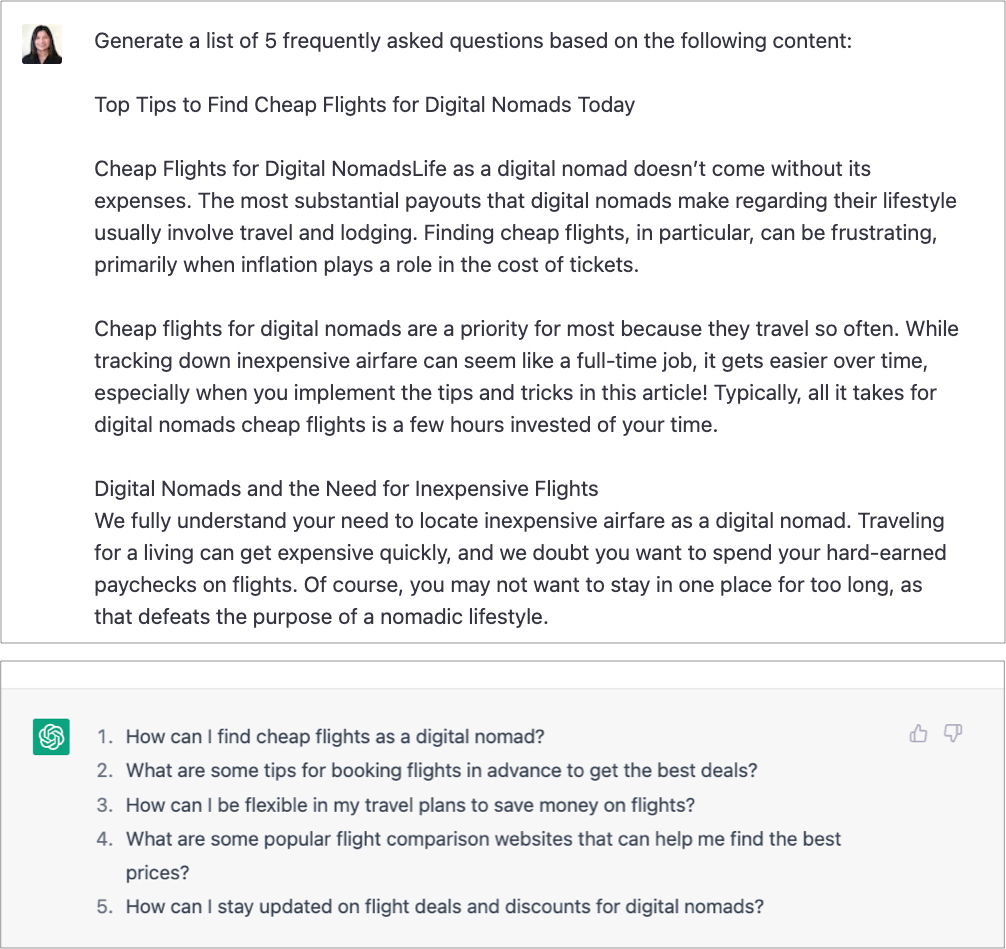 9. Provide facts and stats to use as an input to back your content

“Generate a list of the top 10 facts, statistics and trends related to <topic>, including their source” 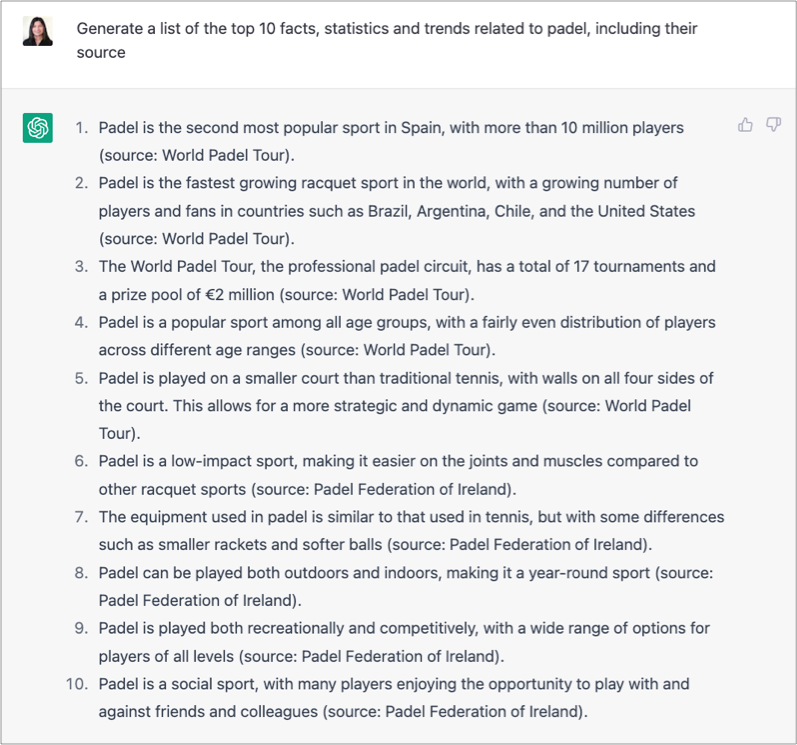 “Generate an X words summary of the following content: …” 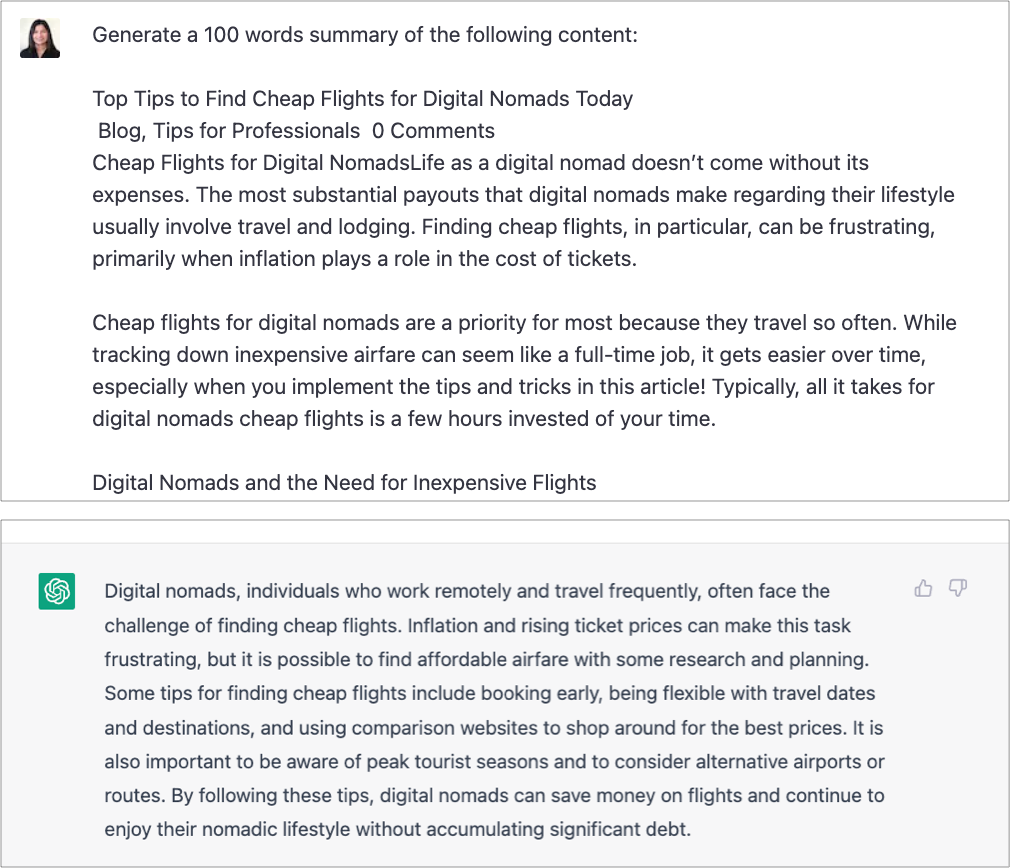 “Specify the sentiment of the following titles, assigning them the values of: positive, neutral or negative. Generate the results in column, including the titles in the first one, and their sentiment in the second: …” 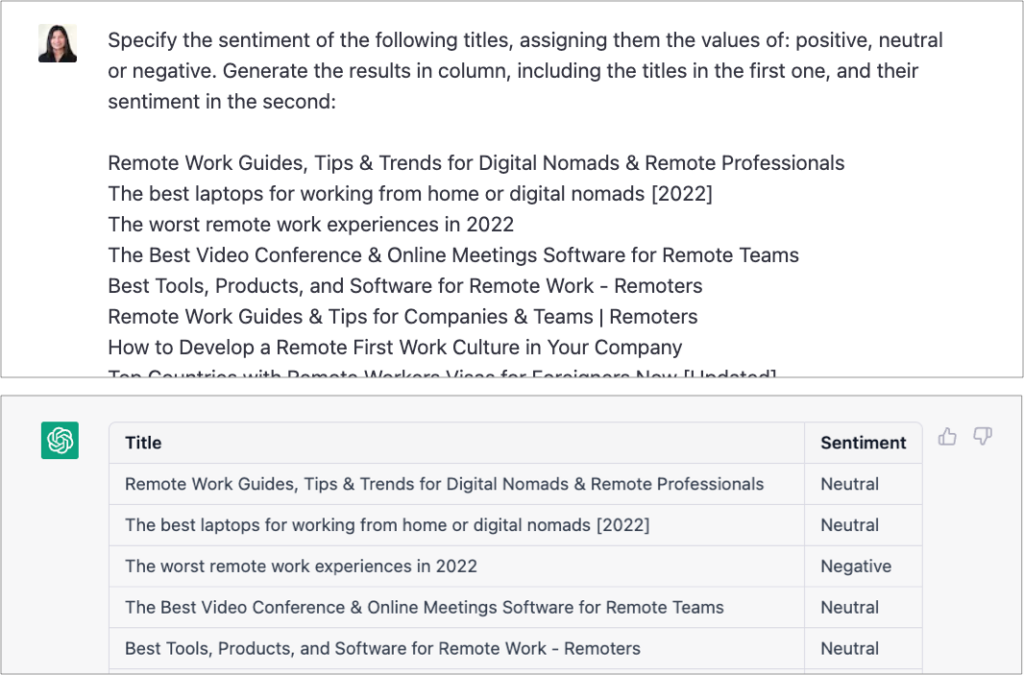 “Cluster the following titles into groups based on their semantic relevance: …” 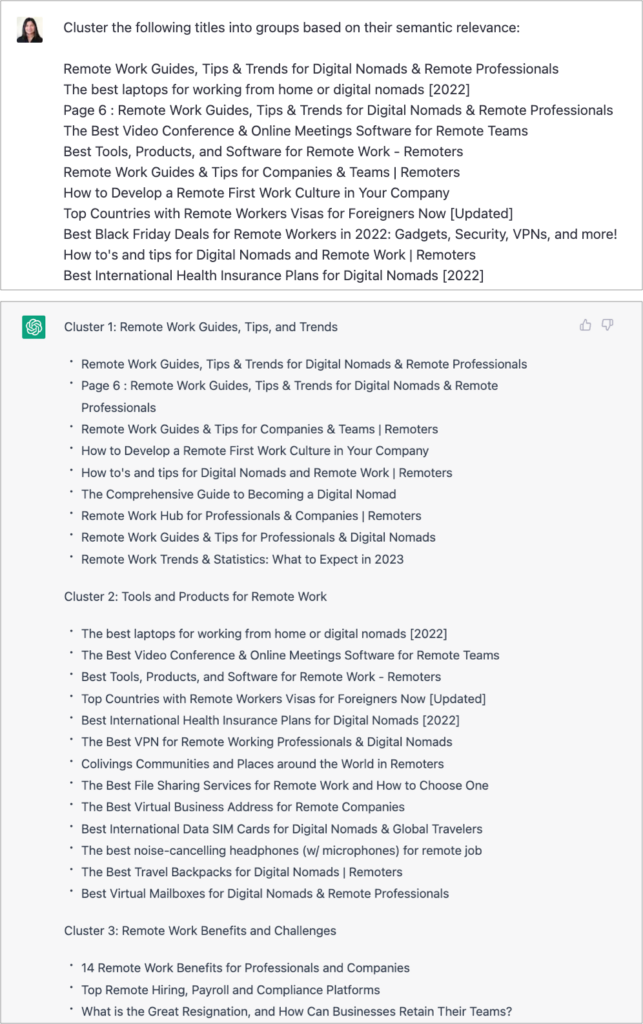 “Generate the FAQPage Schema markup for the following questions and answers:…” 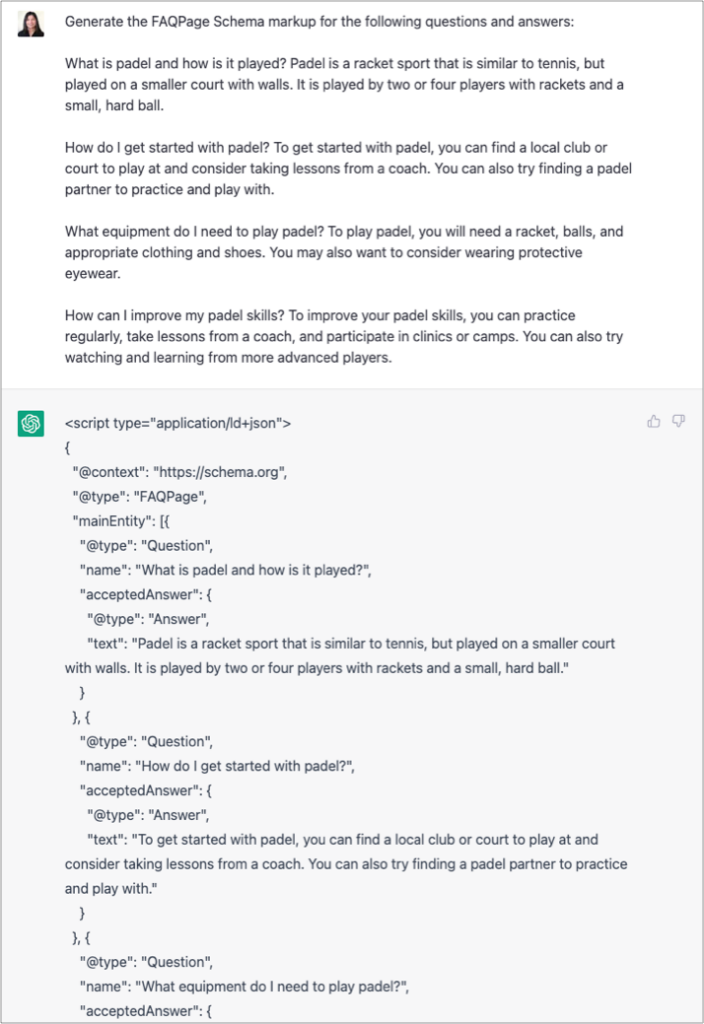 14. Generate Hreflang tags for to use as patterns for your site pages 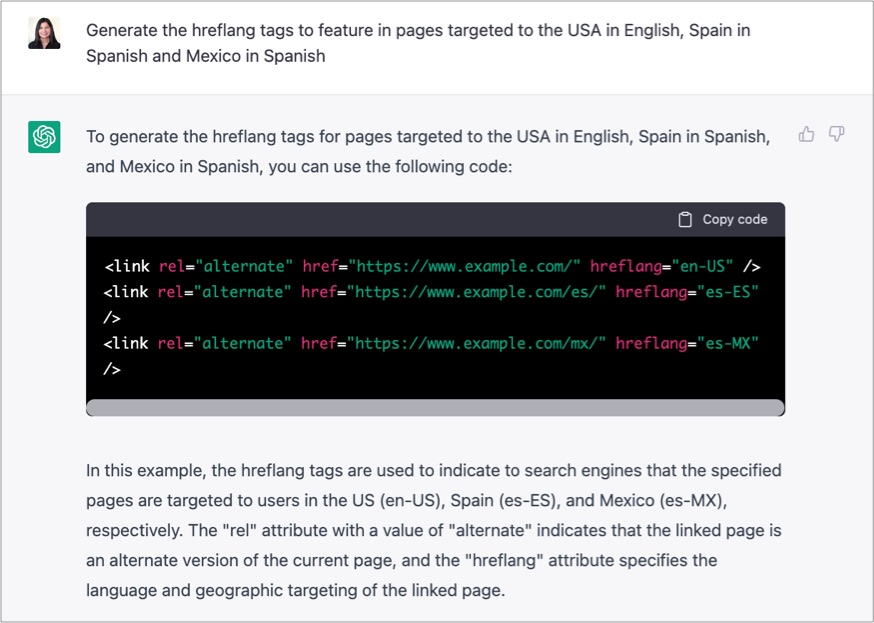 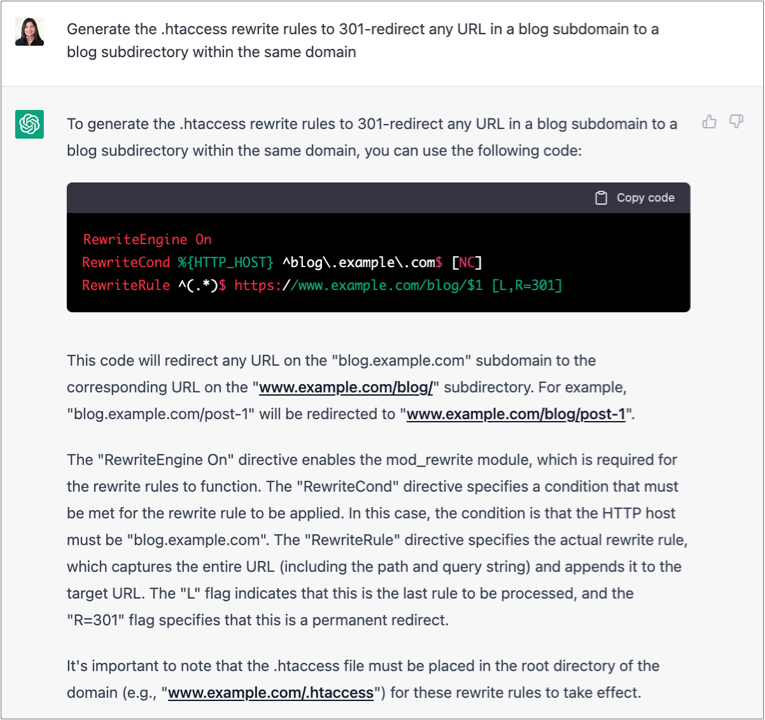 16. Generate the rules for your robots.txt

“Generate a robots.txt rules to block the crawl <location to block> but allow the crawling of <location to crawl> within the domain …” 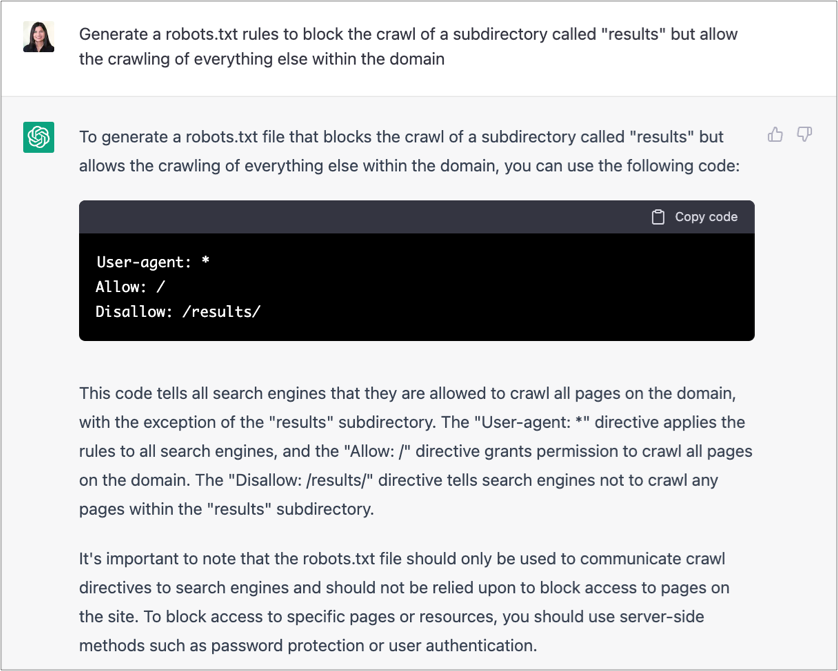 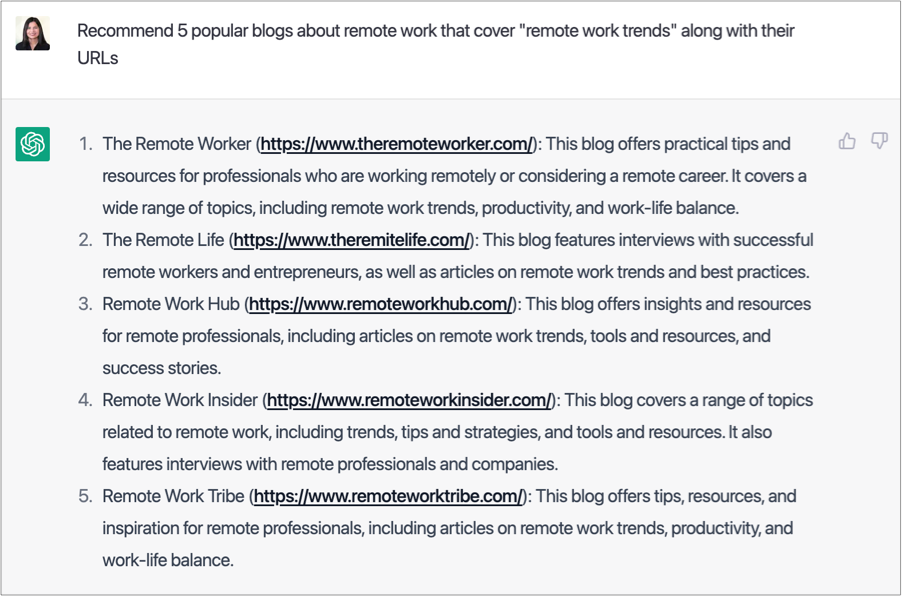 Let’s use one of the templates shared by Ahrefs in this guide and ask to reword it to make it unique:

“Rephrase the following email while keeping its meaning, to make it sound fun but still professional: …” 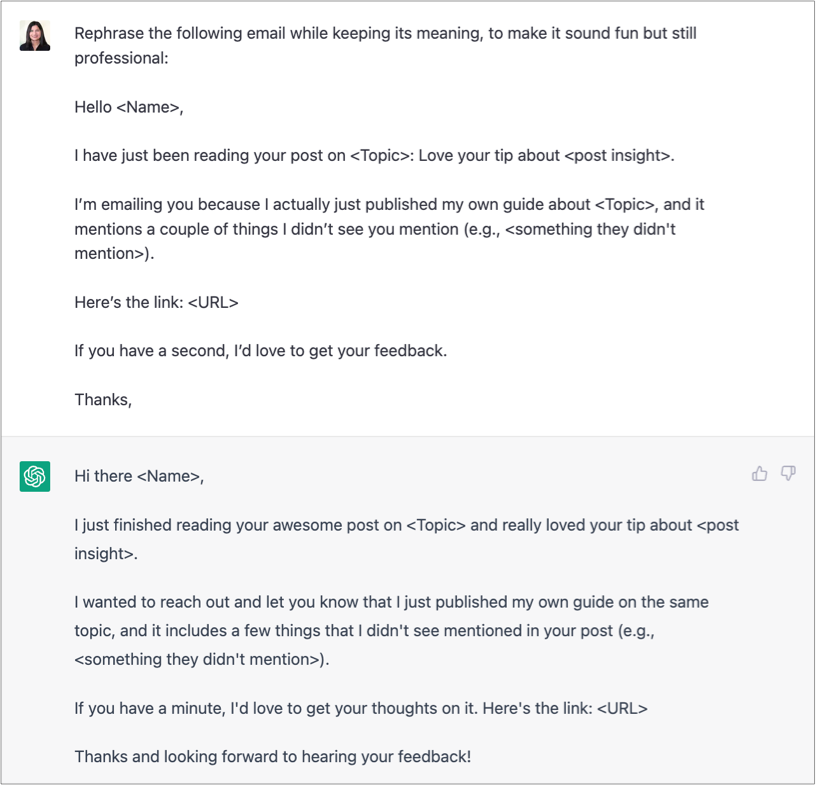 19. Help you answer Help a B2B Writer or HARO requests

“Please write a professionally sounding and short reply to the following “Help a B2B Writer” request saying that I have first hand experience and happy to provide the input needed as long as I don’t mention the site names: …” 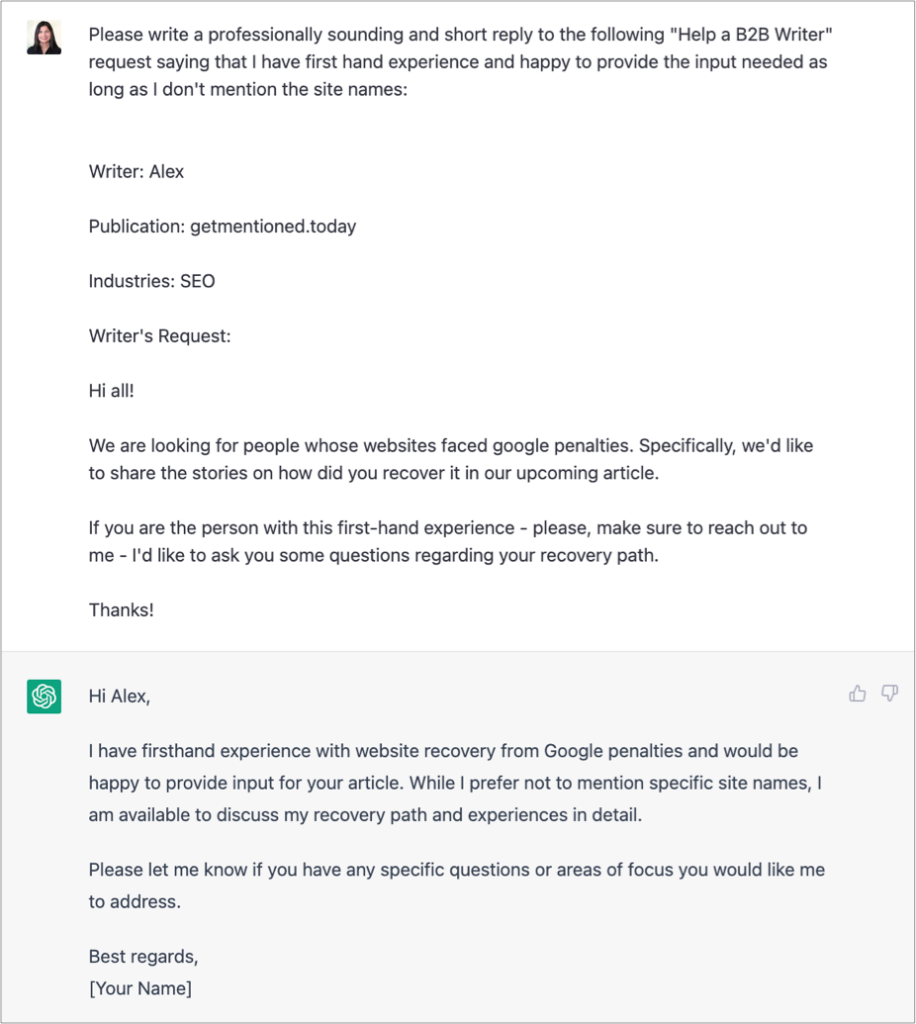 Check out the “GPT-3 + HARO Journo Response Generator” that automates even further steps of the process.

“Generate a regular expression that matches any of the following terms:<term 1> <term 2> <term 3>” 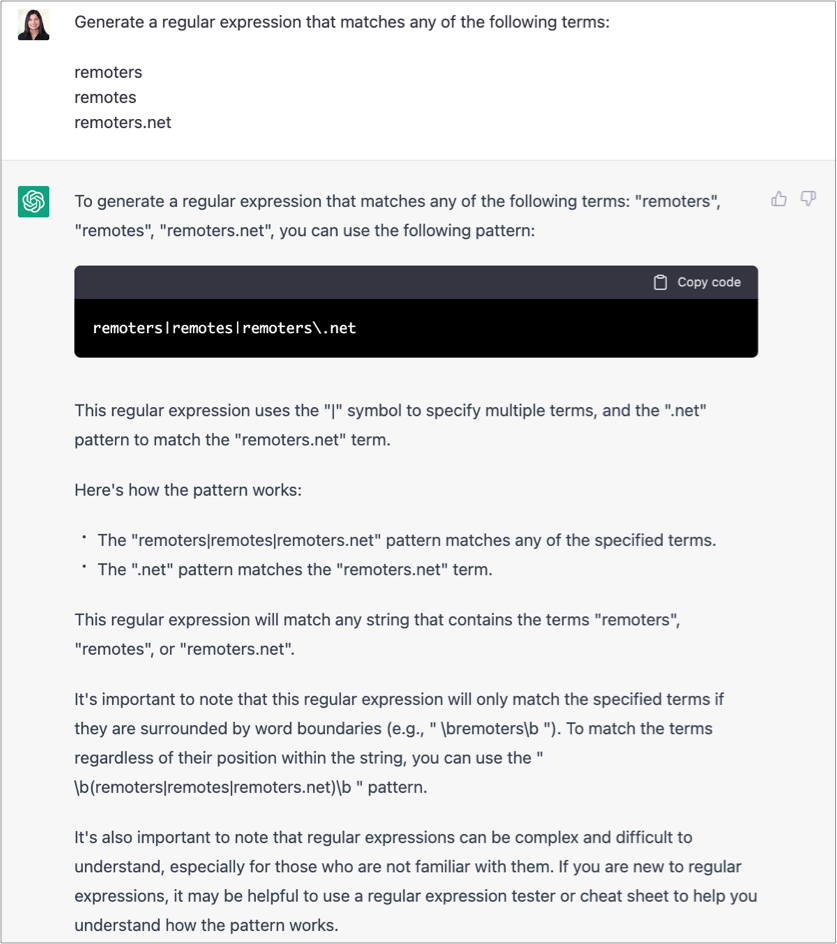 What other use cases have you found for ChatGPT in SEO? Leave them in the comments!

Check out these similar articles