Although I’ve written before about the potential of reaching an International audience, shared a guide about how to start doing it (with some tools and considerations to take) if your international presence it’s not correctly implemented it can also represent not only a lost opportunity, but a negative investment and a bad experience that might end up with alienated visitors (especially if you’re a startup and only starting).

1. Don’t confuse your users with an over-complicated International structure that doesn’t provide value

Make sure that each of your international Web presence (whether it is a ccTLD, a subdirectory or a subdomain) provides real, unique value to their users.

Avoid having an excessively complicated language or country targeted structure that doesn’t feature “real” content targeted to this audience, since it will likely cause confusion and make you waste resources that could be invested to create real value and a good experience.

For example, when users from Spain access to the Google Webmaster Central Blog they’re redirected from http://googlewebmastercentral.blogspot.com/ to its Spanish ccTLD, http://googlewebmastercentral.blogspot.com.es/ that features the exact same content in English than its .com version and includes a canonical tag referring to it: 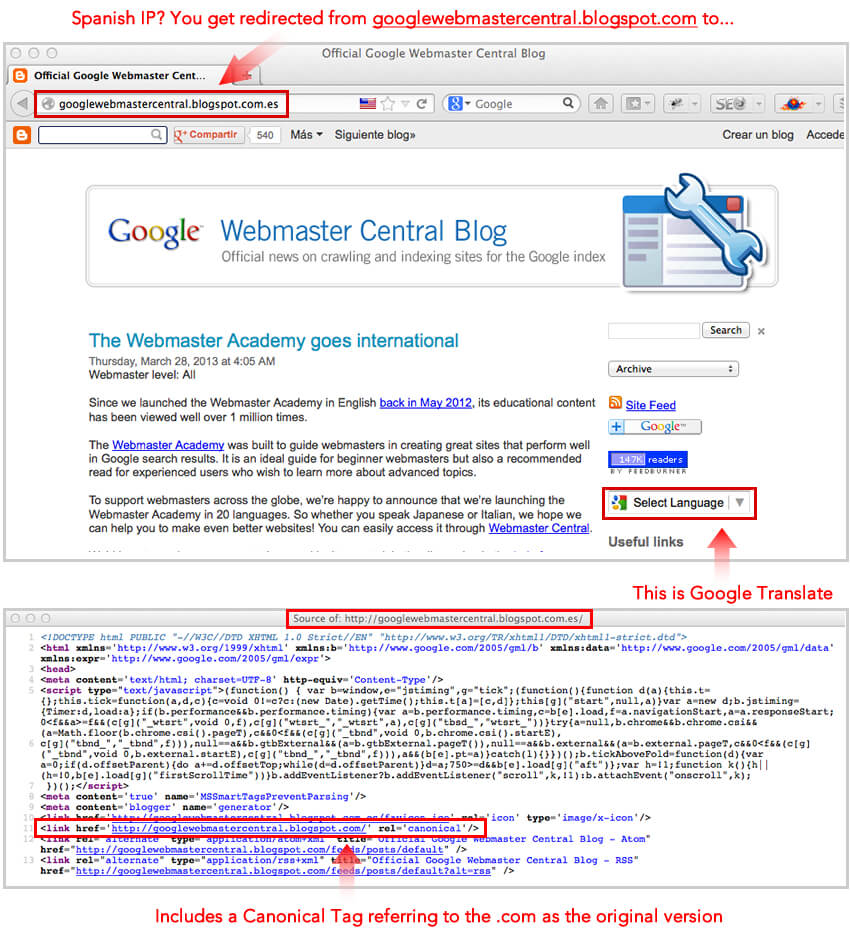 Why the redirects towards these ccTLDs that feature the same content and add canonicals towards their .com version anyway?

Wouldn’t be better to just show the content through their main domain, avoid publishing it and redirecting users to the same content in their ccTLDs and use these ccTLDs to feature localized content in these other languages, really targeting these other countries? They could also start using the rel=”alternate” hreflang=”x” tag instead of the canonical tags and start ranking with them too 😉

Since this is Google they can afford to do this but in most cases you really need to avoid having a complex international structure that doesn’t add real value to your users (or your site rankings and business benefits) and just complicate their experience.

2. Suggest and warn your International users instead of just redirecting them

As I shared previously automatic redirects can be confusing, especially when you don’t warn your users they’re being redirected since there might be a version that is more suitable to their needs because of the language of their browser or their IP location.

Instead of automatically redirect based on the browser language, you can suggest with a message in a non-intrusive way (not a pop-up or interstitial of course), as Amazon does when it identifies I’m visiting their .com version from a Spanish IP:

In case a redirect is really needed, you should warn your users that they’re being redirected based on a particular criteria and give them the option to switch again to the version they were initially accessing.

This is implemented by Tripadvisor when trying to access to their .com version from Spain with a Spanish browser, as it can be seen in the following image:

Or by Yahoo too:

Respect your users language and country preferences, avoid taking them automatically where they have not asked to go and in case you need to, always inform them about where you’re taking them with redirects and why, giving them the option to switch back.

3. Give your users the option to easily switch between language or country versions

Make it easy to your users to switch between your site language or country versions giving the menu the visibility it deserves by featuring it in a consistent way through all of the site, in the upper area instead of hiding it in the footer, as Autodesk does, instead of how Adobe shows the option, for example: 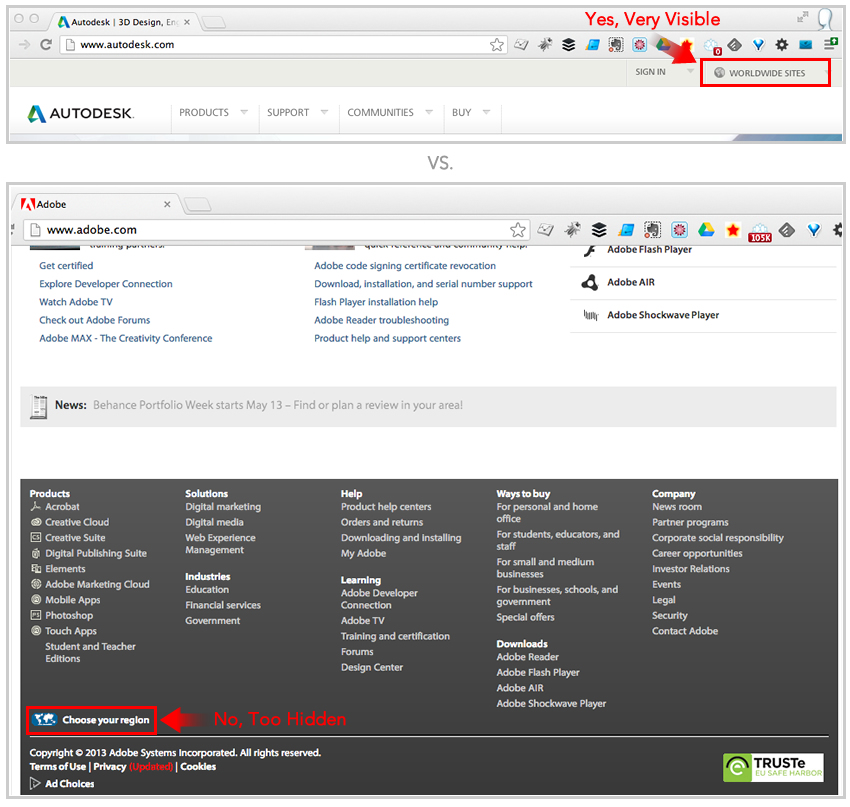 It’s important that you not only always give your users the alternative to switch between your language or country versions, but that you also do it while giving them the best possible experience, by featuring this option in a visible way.

The localization of your international Websites should go beyond content translation (I’m sure we all have heard at least once a situation of a translation gone wrong),  using their terminology (that might be different between geographic areas even if they speak the same language), taking also into consideration the seasonality, local calendar, culture, trends and behavior of your industry (competitors and audience) as I shared in this post about “7 Aspects to Drive Your International SEO Industry & Audience Research“.

Additionally, moving beyond content, seasonality and offering, your integral Website experience should be “localized” to effectively connect with your audience, from pricing systems (not by just switching currencies), temperature scales, time zones and even your website design.

For example, when I see that the prices of the same products feature the same number and just the currency is changed -from US$ 329 to 329 Euros or from US$ 399 to 399 Euros- as it happens with the Apple store in the US and Spain (although they surely have a very well thought pricing system) as a Spain based user my perception is that they have just changed the currency without realizing or caring that 329 Euros is not really US$ 329 but US$ 421.479 instead, which means I will be overpaying for the same product just because I’m based in Spain, which is not cool and can upset Spanish based users.

Here you have the prices for the US Store in Dollars: 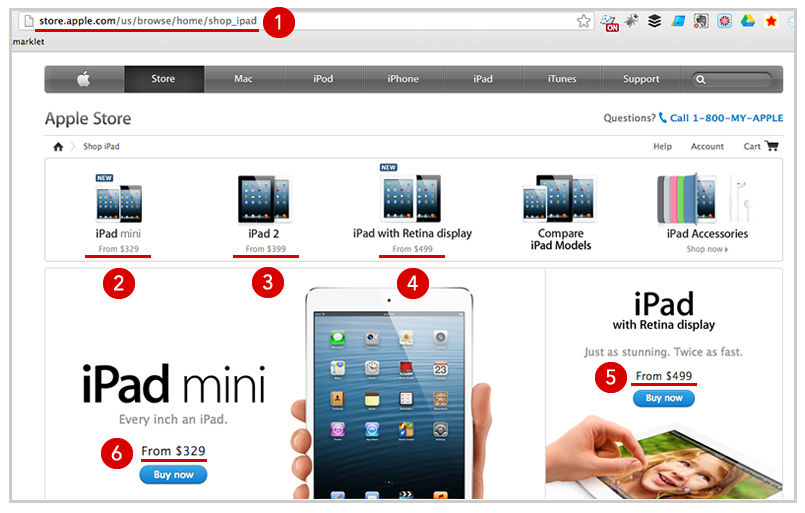 And here the Spain store with prices in Euros: 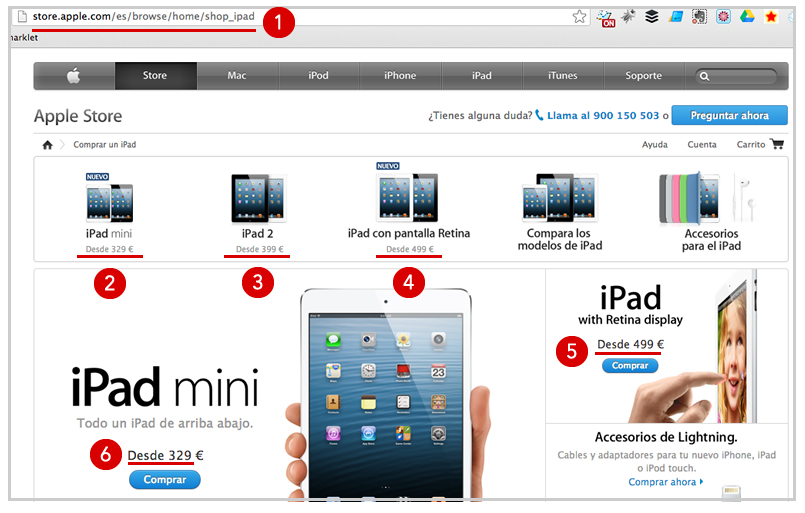 See what I mean?

On the other hand, a good example of a localized user experience is the one you get when you register to an SEOmoz Mozinar with GoToMeeting, where you can select your time zone to see the Webinar date and time details based on your location: 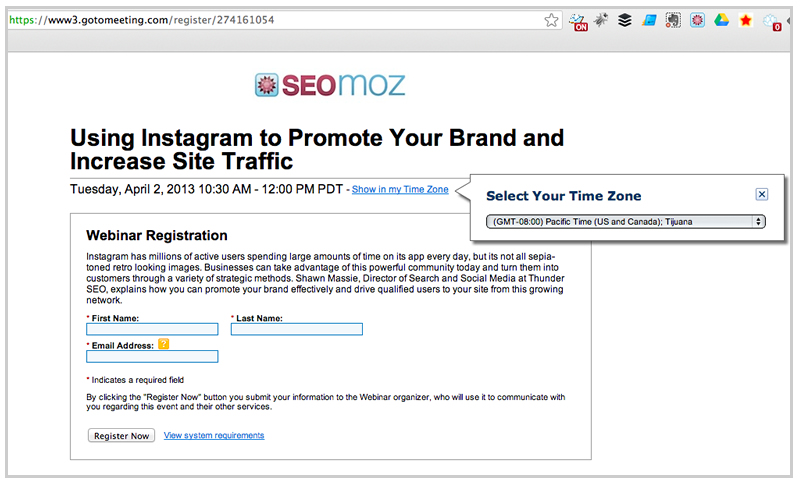 And what about your Website design? Sometimes what it’s attractive to your US users is not for some International audiences, with different parameters that might be related to cultural differences.

For example, take a look at this interesting thread in Quora, asking “Why is the design of many Japanese websites so bad?” where a Japanese American explains how “What works aesthetically in the US or in Europe doesn’t always translate to Asia. Expectations are vastly different, and that has a big effect on how people interact with the web.” giving examples of magazine covers and TV shows.

From a Web perspective, Nick Eubanks shared in that same thread how after hiring a Japanese designer who changed the fonts sizes, added much more images and text he saw a better traffic and engagement response in a Japanese targeted Website.

As you can see it’s fundamental that when you develop an international Website version you don’t only think about localizing your content, but your integral user experience to connect and satisfy different audience needs.

Your internationally targeted country or language Web versions need their own “location”, a specific Website structure that your international audience can visit, convert with or share, which search engines can crawl, index, rank and that you can easily measure to enhance, test and control.

To be able to do this effectively each of your international versions should be featured in their own, consistently organized and configured Web structure, through ccTLDs, subdirectories or even, subdomains, depending on your type of targeting (language vs. country), business, content and technical characteristics, requirements and constraints as I shared in this International SEO strategy post.

I’m a Dropbox fan but unfortunately they fail to do this correctly with their Website language versions (If someone from Dropbox ever comes to this post I would be happy to help in exchange of more free storage 😀 I’m kidding!).

As you can see in the following images they allow users to switch between different languages through a non-crawlable menu: 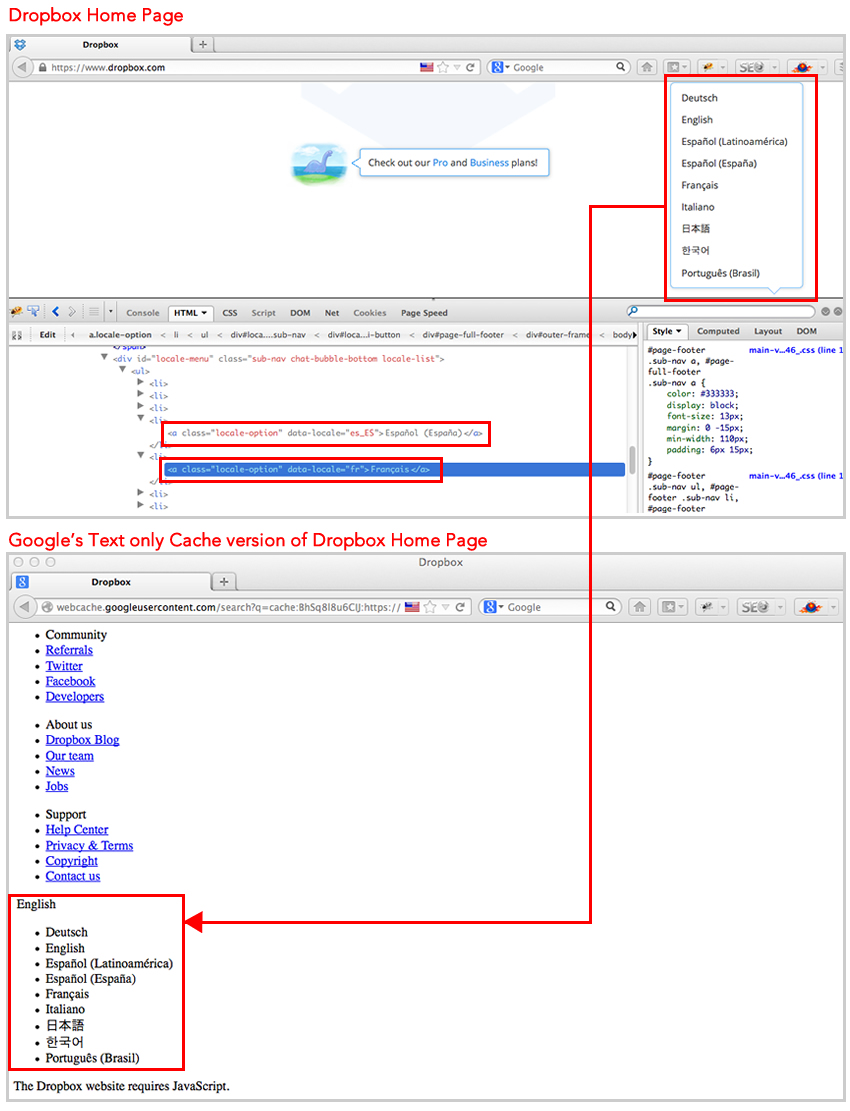 It’s not a coincidence that the language menu is non-crawlable, since all of the language versions are shown through the same URLs than the English one (that is the main one), as you can see for example with the home page in https://www.dropbox.com/: 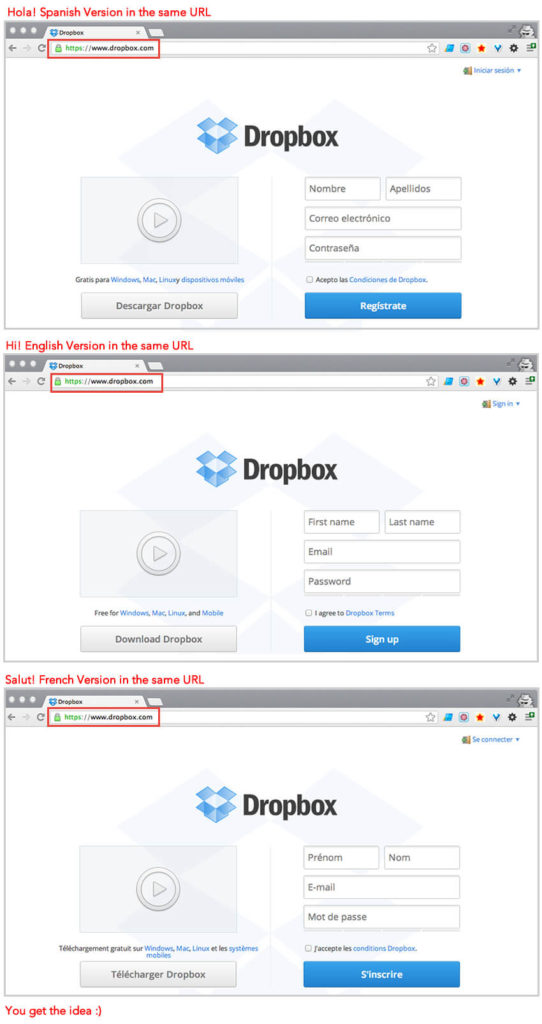 They also feature their German, English, French, Spanish, etc. versions for their Mobile section through the same URL: https://www.dropbox.com/mobile and the same happens with all of their site different language versions but the Help section (where another issue that I wil share later arises).

The problem with this is that Google will only index one content, language version per URL (the one that is featured by default, without cookies) which is the English version, but won’t be able to “identify” the other language versions that are also shown through those same URLs.

You can see how when I search in Google.es for “descargar dropbox en español” (download dropbox in spanish) I get the Dropbox home page but with an English snippet: 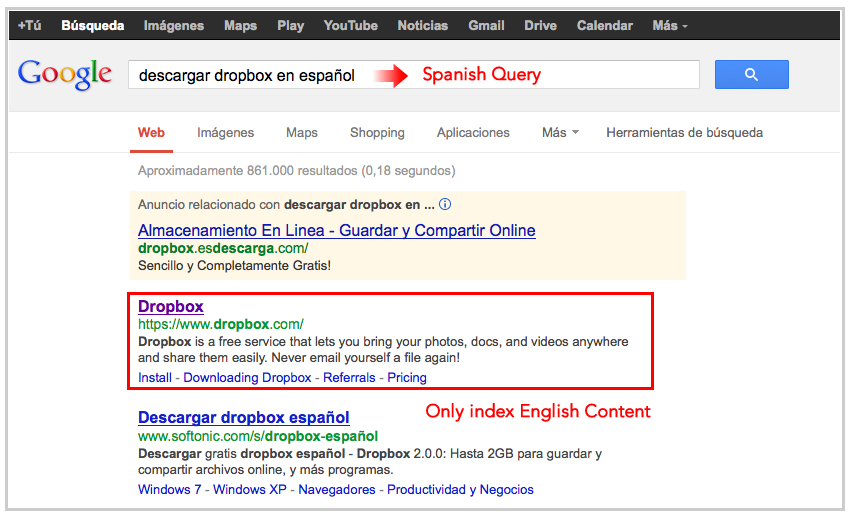 From a user perspective this is also far from ideal since it becomes complicated to share a specific language version of the site with another user and the URL naming is all in the default language, English, which is not relevant to the content that is showing at times in other languages.

On the other hand, as I mentioned before Dropbox has a specific URL structure for other languages for the pages in their Help section, as it can be seen in the following image for the Spanish versions (through both “es” and “es_ES”): 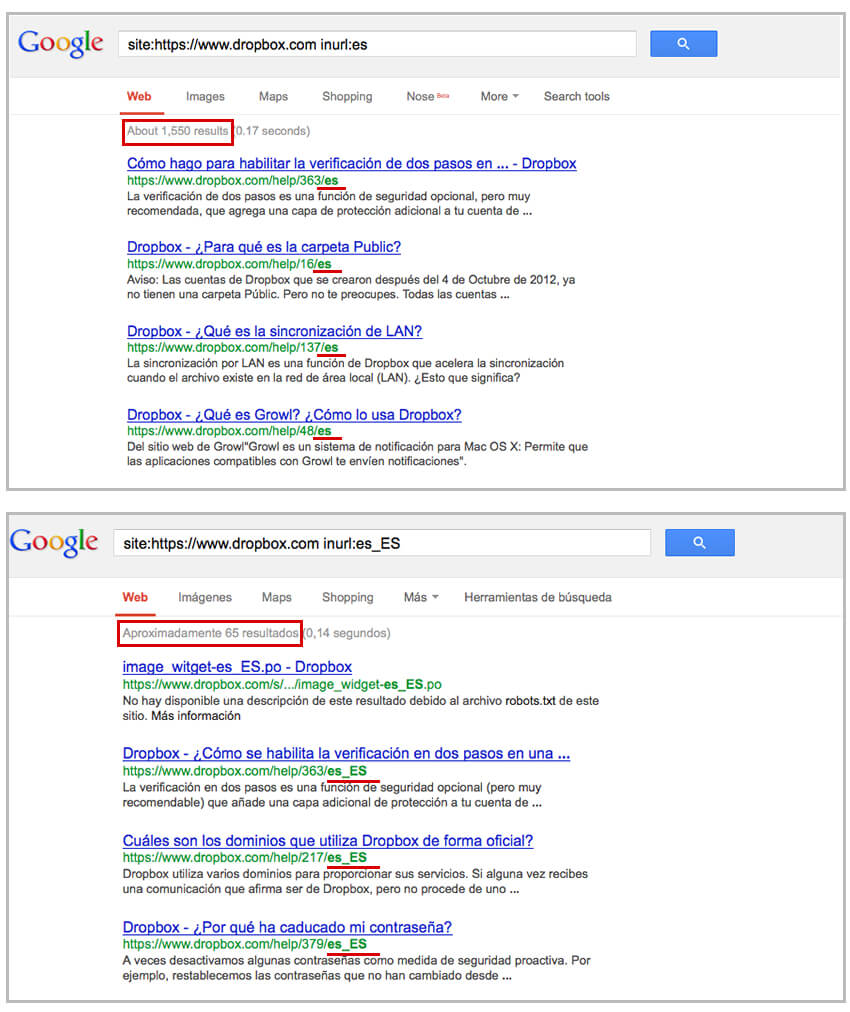 Nonetheless, these help pages URLs in other languages are not consistently linked from the language menu nor featuring a rel=”alternate” hreflang=”x” tag (and they are not blocked nor prevented of getting indexed with robots.txt, meta robots or canonical tags), so they’re just internally “hidden”, which is also a lost opportunity not only from a user, but also a search perspective.

Additionally, if for some reason you end up in one of these help URLs, for example: https://www.dropbox.com/help/316/es in Spanish, if you want to switch to its French version through the language menu instead of going to its French URL  https://www.dropbox.com/help/316/fr you stay in the same Spanish URL with the main content in Spanish but menu, footer and other static elements of the page translated to French, as it can be seen in the following image:

Pretty confusing right? So it’s not only about localizing (beyond translating) your Web experience but making sure you’re effectively configuring your international versions with a consistently organized, crawlable and indexable specific URL structure to give your users the best experience, making the most out of your international Web investment.

I hope that you follow these recommendations to maximize and achieve success with your international Web presence. If you have any questions or doubts about them please let me know in the comments!

Join +4,000 other SEOs & subscribe to receive every week an email with relevant SEO resources, tips & tools recommendations that I’ve found particularly useful in my #SEOFOMO newsletter.